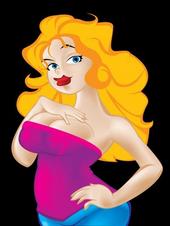 Gloriana Eloisa Partridge was born on November 15, 1582 in Cheapside, London to parents Malcolm and
Sarah Partridge. Her father Malcolm, was a Bread Street Baker. Gloriana was an only child. Glory ran away at a young age to marry an actor where she acquired the "St. Clair". After Glory ran away her parents refused to speak or talk to her again because they were very religious and their daughters marriage horrified them.


Glory met Angus Jeremiah Cambell the III while on stage. He turned her into a vampire as a birthday present to
himself on December 31, 1604. Jeremy Blade as he calls himself is Glory's maker and protector for all these years.

Glory believes all the world is a stage and has been an actress for most of her very long life. She even befriended
William Shakespeare or Billy as she calls him, while working on one of his plays.


Glory is a fan of all things Vintage and even owns her own shop with all the items she's collected over the
period of her lifetime. Vintage Vamps Emporium is her shop where she brings all the things she loves to be sold.
She can never turn down a designer label and will happily support Coach, Dooney and Bourke, Dior, and the ever
fabulous Hermes Birkin (the very bag she acquired from the annoying Lucky). At least she got something out of
the spoiled woman whom she saved her life by turning into a vampire. Is Lucky grateful? Of course not. Don't think Glory is all about her designer bag. She loves vintage clothing, a fabulous pair of shoes and anything that can keep this fabulous, voluptuous blue eyed, blond haired beauty looking fabulous.

Glory isn't all about herself though. She is a devoted friend and will do anything for those she loves. She is protected by a shifter in the form of an adorable labradoodle who goes by the name of Valdez.

Glory adores a good movie and an ever fabulous tv show. She never misses the Sex and the City whom she watches with her best vamp gal pal, Flo (Florence Da Vinci) She also enjoys crooning with Flo to the vivacious and sexy Israel Caine. They own all his dvds, cds, posters, etc. Glory's favorite play is the Phantom of the Opera it's even the ring tone on her cell phone.

Although Glory's heart belongs to Jerry Blade, she is engaged (for the paparazzi so they claim) to the very Israel (Ray) Caine who's music she had swooned over for many years.

Gloriana is a wonderful vamp who has survived all these years with her wits and beauty. Her friends and family. We look forward to reading many more adventures about this woman for many years to come.