Jet's Doggie Days: It is Ruff Living with an Author!!!

Jet came to us as a rescue dog. He is a pure bred Whippet and was owned by a woman who had rescued him first. I don’t know where he came from before that, but he had a scar where he’d tangled with barbed wire and he was afraid of men. The lady we got him from had a terminal illness and hated to give him up but had no choice. My husband John loved to race dogs in flyball tournaments. We had an elderly Bedlingham terrier who loved flyball. That’s a relay race with dogs in a four dog team jumping hurdles to get down a course. They each hit a box which gives them a ball to take back down to their owner. Belle was a champion flyball dog, the only Bedlington in the U.S. You can see me in a picture with her in my early Real Vampires books. She had fur like a lamb and was a sweet dog. When she started going blind, John searched for a dog he could train to take her place on the flyball team. He knew Whippets were fast and was excited to find Jet.

Well, Jet is fast, but he never caught on to flyball. He loved the running part but he had absolutely no interest in a ball. He wouldn’t catch it in his mouth and he certainly wouldn’t bring it back to my husband. Jet was a failure. He got used to men, or at least to John and adored him. He really became my dog though and is still happier around women. John did take him to lure coursing which is a race where dogs chase a fake rabbit around a course. It’s really a plastic bag on a wire. Jet loved that. He ran like the wind after that bag. I called it Little League for dogs. Sorry, but I did that duty with our son, I wasn’t about to get up early on Saturday and Sunday mornings to drive almost a hundred miles for a dog to do something like that. After my husband’s death, Jet had to give up lure coursing. Now he runs around our back yard, chasing the occasional neighborhood cat that dares enter the yard. He leaves the squirrels alone. There are just too many of them.

Obviously I’m an animal lover. I grew up with a dog in the yard and a cat in the house. I married a man who owned a dog. I can’t stand to see a helpless animal abused. Or animals trained to hurt each other or people. I really don’t even like to watch the circus. Had a bad experience once in a foreign country where I saw animals mishandled and never wanted to see that again. Anyway, Jet doesn’t sleep with me, but does like to wake me up early for his breakfast and morning constitutional. He usually lies on the floor next to the computer when I’m writing. He even listens when I complain about something I’m reading on the Internet.

When I named the shape-shifter Valdez in the Real Vampires books, I was thinking of a dog my brother had for many years. Yes, we are a dog family. The original Valdez was a Labradoodle and one of the smartest dogs I ever met. He once got lost on one side of Houston and found his way to my brother over thirty miles away. My brother lived in Austin for the last years of Valdez’s life and he’d always take the dog down Sixth Street on Halloween. Valdez would wear a colorful bandana and would act like a perfect gentleman when greeting other people celebrating the holiday. Halloween is a fun time on Sixth Street. When the dog died at a ripe old age, we all mourned and I thought my brother would never get over it. Valdez has a burial plot and headstone in a pet cemetery in Austin. My brother has a picture next to his computer of himself with Valdez. He was happy that the V-dog lives on in my books. I’m happy about that too. 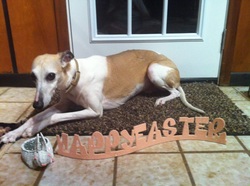 "Hope everyone out there has a great Easter. Me? I'm hunting for eggs."

I am outta there! 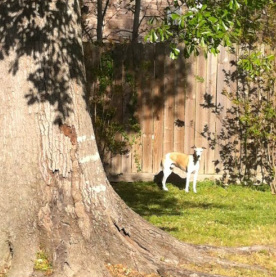 "That's me hiding behind the tree. Too much house cleaning going on in there. Thanks, Cindy Callaway, for reminding Gerry about the full moon tonight. Yes, she'll be out here twirling like a fool, asking to fill 'er up. More dog cookies for me! Three times clockwise. She swears it works." 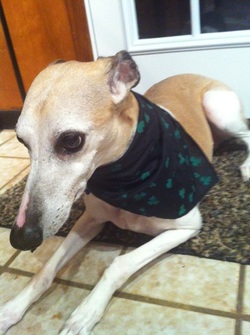 "I'm ready for St. Patrick's Day tomorrow. Not sure how much Irish is in me but Gerry put some green in my food bowl. At least it's not a sweater. Thanks for buying her book! It's a happy place around here." 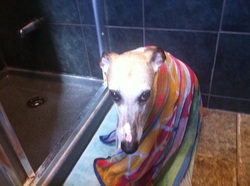 "Can you believe she said I smelled 'Doggish'? Just because I lay on her pillow all day. Anyway it was flea soap. Dare them to hop on me now. I'm a pretty boy."

Real Doggies Have Hips too! 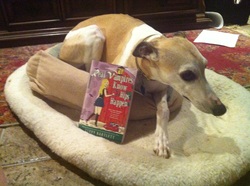 "I'm so excited about Gerry's book coming out. Not. Four more days. Here's another teaser. Glory's mom is a real pain. See for yourself."
Those of us who call Olympus home don’t waste our energies on such trivial emotions.” She sighed. “If you truly want this man, then he must prove he’s worthy 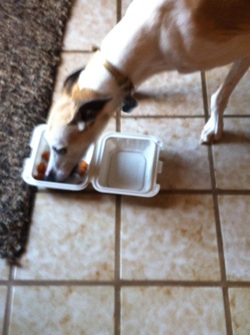 "She brought me popcorn shrimp from Red Lobster, my favorite. So no gripes today. I'll even plug her release day, March 5, for Real Vampires Know Hips Happen. Buy it so I'll get more of this delicious shrimp. Okay?" 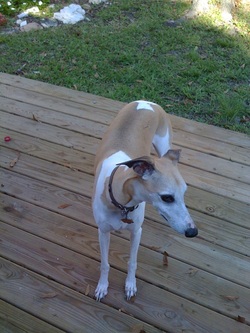 "We're getting a new back door. My fault. I like to run and hit it instead of barking when I want to come in. Gerry thinks that's bad. Tough. It's my technique. Our back door has windows so I can see out. Got to keep my eye out for unwanted visitors. I'm guarding the place."

Jet the Sensitive One 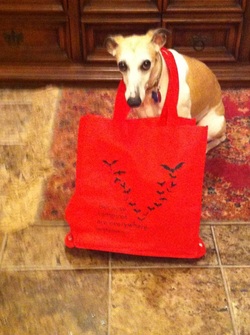 "I'm ready to run away from home if she'd just open the damned door. The carpenter has been here all week. The noise! Doesn't she know I'm sensitive?" 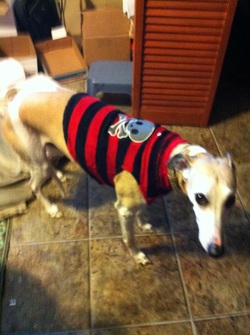 "Today I'm a badass. She's had a man here working in the kitchen, making noise. I hate noise. Saws are the worst. I did my job, tried to scare him away with a bark. He ignored me. She's doing stupid stuff like buying new drawer pulls. And this outfit. Save your money, Gerry. You'll need it if you don't sit down and write instead of running out shopping. Am I right, people?" 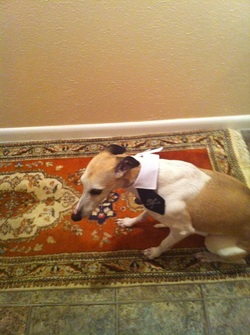 "She's been leaving me and going shopping for hours lately. I made her sorry. Right here. On her oriental rug. What's that smell? Revenge, lady." 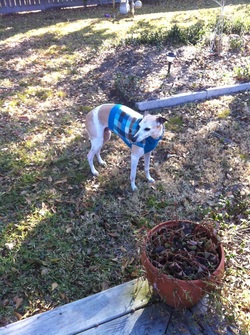 "Cold but the sun's out. Gerry said once that God landscaped this yard. I believe it. How many plant sacrifices will it take out here? She can't grow weeds." 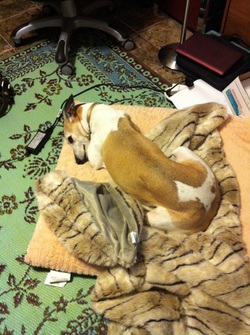 "Life around here is boring. I finally dragged this fake fur throw from the den to the computer room because all she does is sit here and stare at the screen. She talks to it too. It doesn't talk back. Is she crazy? Probably." 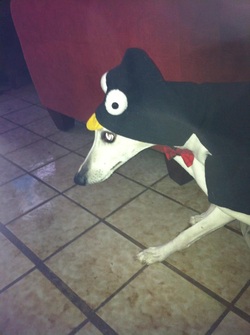 "Baby, it's cold outside and this penguin costume was too tight. Maybe I should mall walk with Gerry. The nerve. Some of our Christmas visitors said it looked like I'd gained weight last year. Really? When she has me on lite dog food? So I beg after dinner. It's a dog thing." 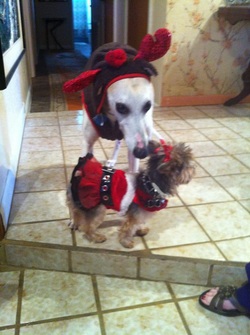 "Is this a dog or a toy? Either way, she'd better not have eyes on my new squeaky toy. And who are all these people? I'm going to my room." 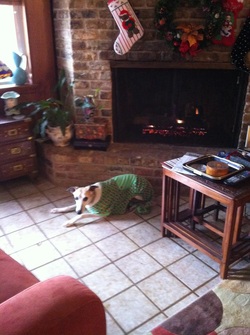 "Did I hear Santa? Enough with the house cleaning. Let me back on my favorite chair. At least give me that chew in the stocking. Love the jammies though."